'We choose to go to the Mars!'

We choose to go to the Mars in this decade. Not because it is easy, but because the science, technology and humankind need to grow and expand to the outer space.

We all know that it is an expensive journey, but wait a minute! What if there are ways how to build a spacecraft made of everyday electronics, tweak it hard and keep it telling us how well it works? What if we are able to fly what we have learned about physics, materials processing and space effects?
What if all we know could help the world to expand to the Deep Space safely?

Yes. Journey to Mars is really expensive. Let's start around our planet first...

The Lucky-7 satellite, which is being launched nowadays, was designed, built, and tested by two Czech space enthusiasts - Jaroslav Laifr and Pavel Kovář who looked
too foolish back in time that only few people believed in their success.
But - in science we trust!

It officially started in 2015 with just ~1000 Euros by establishing a 'kitchen' company. SkyFox Labs s.r.o. located in Prague, Czech Republic has been used as an economic tool allowing us to materialize the know-how into real things. The team cooperation paved the way towards our passion for space and aviation - and the way from the kitchen dream to the launchpad.

Standing by the amazing NewSpace community, we succeeded to transfer our ideas into products. Several customers around the globe are using SkyFox Labs technologies and we are damn proud of it. From the east to the west, from the north to the south. From Japan to California, to Finland and South Africa. Many of them also flying over our heads every day. Look up to the sky - maybe just right now?!

Thank YOU for being the part of our dreams! It is our pleasure to serve Yours!

We are launching 1U CubeSat, made down to a screw fully in-house - into 530 km SSO:

The custom-build Ultra Low Power GPS L1 C/A navigation system will tell us where the satellite is and where it was collecting the data once out of the reach of our two Groundstations. The actual velocity and time will be associated with the position.

Gamma Ray Spectrometer equipped by the CsI-Tl scintillator with 5 cm^3 volume will measure in-situ spectra in the energy range of 0.3-3 MeV. It will be able to detect the Gamma Ray Bursts (GRB) when flying over quiet parts of the orbit with 1 Hz bins. It is not replacing expensive GRB laboratories, but it could be a nice complement.

The VGA Colour Camera will be able to capture the images seen from the spacecraft. The Contrast, Brightness and Exposure are parametrically tunable. We aim to capture aurora oval and many other photos from space too :-)

Wide Energy Range Gamma Ray Radiometer / Dosimeter (0.3 - 10 MeV) with Alarm function will be able to provide us with the average in-situ doserate every minute.

Two long range-optimized (IoT) half-duplex UHF Transceivers / Onboard Computers with 2 MB MRAM data storage each, are powered via MOSFET-Free watchdog power arbiter and will be able to automatically swap between Nominal and Redundant systems, including Nominal and Redundant antennas. The 4k8 GFSK mode will allow the groundstations to stay accessible even without compensation of Doppler shifts.

A three-axis Gyroscope and a set of three Magnetorquers (X, Y, Z) will be able to determine the tumbling rate and perform the magnetic stabilization on demand.

The Structure, 3+ mm thick Au-Al Sidewall Sandwich Radiation Shields and all metalic parts are bound together to keep the spacecraft charging effects under control.

The Lucky-7 is prepared for launch aboard the Russian Soyuz-2.1b launch vehicle from Vostochny cosmodrome on July 5, 2019. The satellite will be deployed into
the sun-synchronnous orbit at an altitude of 530 km. The launch and integration services are arranged by Exolaunch GmbH. The Czech Telecommunication Office assigned the callsign OKØSAT to the mission, which is also carrying a miniature
golden-finished Czech flag.

Since July 5, 2019, the satellite is in orbit and sending data! Two-way communication establised.

For more info, plots, graphs and camara photos, feel free to follow us on Twitter at: http://twitter.com/SkyFoxLabs

As of June 7, 2022, 3 years after the deployment, the satellite is still 100% healthy and coworking with groundstations in Czech Republic as planned!

Several abroad radioamateurs also reported the activity. Namely: EA4GPZ, K4KDR, EU1SAT, OM3KAA as well as many others via global SatNOGS network! Thank you all for spending time with Lucky-7 at 437.525 MHz!

Lucy is literally like a small kid asking for full attention day & night! :-) but we love her!

If you cannot hear the satellite, please do not panic. Maybe it is just again in the planned scientific mode recording data and having the Beacon Off. This is the intentional behavior of the radio transmitter to minimize the EMC environment for sensitive measurements. Time to time we announce the 20 second beacon status as On or Off on Twitter. Most of the time however, the satellite is only active over the EU to download the data and command the recorder for next orbits where it is out of reach of the Czech/OK groundstations. 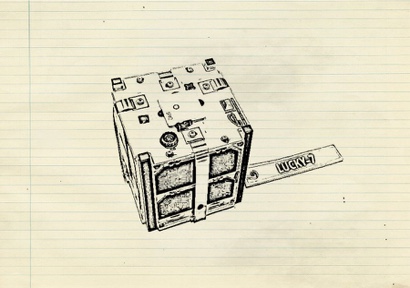